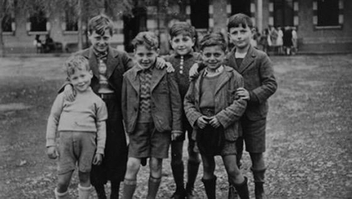 History of Foster Care in the United States
Some of the earliest documentation of children being cared for in foster homes can be found in the Old Testament and in the Talmud. These references establish caring for dependent children as a duty under law. Early Christian church records also show children were boarded with "worthy widows" who were paid by collections from the congregation.

It was English Poor Law, however, that lead to development and eventual regulation of family foster care in the United States. In 1562, these laws allowed the placement of poor children into indentured service until they came of age. This practice was imported to the United States and was the beginning of placing children into homes. Even though indentured service permitted abuse and exploitation, it was a step forward from almshouses where children did not learn a trade and were exposed to horrendous surroundings and unsavory adults. Various forms of indenturing children persisted into the first decade of this century.

In 1636, less than thirty years after the founding of the Jamestown Colony, at the age of seven,Benjamin Eaton became this nation's first foster child.

In 1853, Charles Loring Brace began the free foster home movement. A minister and director of the New York Children's Aid Society, Brace was concerned about the large number of immigrant children sleeping in the streets of New York. He devised a plan to provide them homes by advertising in the South and West for families willing to provide free homes for these children, whether for charitable reasons or whatever help these children could be to them. In many cases, these children were placed in circumstances similar to indenture. However, Brace's daring and creative action became the foundation for the foster care movement as it exists today.

As a result of the New York Children's Aid Society's placements, sectarian social agencies and state governments became involved in foster home placements. Three states led the movement. Massachusetts, prior to 1865, began paying board to families who took care of children too young to be indentured. Pennsylvania passed the first licensing law in 1885 which made it a misdemeanor to care for two or more unrelated children without a license. South Dakota began providing subsidies to the Children's Home Society after it was organized in 1893 for its public child care work.

During the early 1900's, social agencies began to supervise foster parents. Records were kept, children's individual needs were considered when placements were made, and the federal government began supporting state inspections of family foster homes. Services were provided to natural families to enable the child to return home and foster parents were now seen as part of a professional team working to find permanency for dependent children.
Become a Foster Parent
Powered by